The new study called ARED2 has added nutrients suggested to improve upon the nutritional supplement found with the original ARED study. The addition of  lutein and zeanxanthin has made this look like a “better” antioxidant supplement to take for AMD (advanced macular degeneration). The addition of omega-3 didn’t matter concerning a more positive effect against AMD. The subtraction of beta-carotene showed no effect. 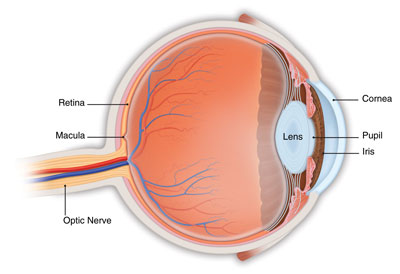 The back portion of your eye is called the retina. Central area of your retina, where the majority of the light focuses, is called the macula. This part of the eye sends a visual picture to your brain through the optic nerve to give us our sense of sight. 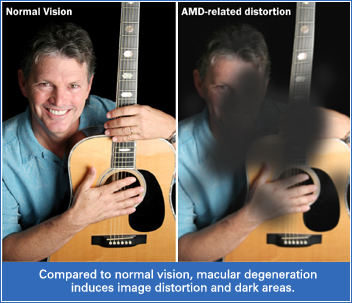 Macular degeneration is a disease where aging plays a key part in causing formation of an abnormal pigment that develops in the macula. As a result, you lose central vision with a possible progression to complete blindness.

Interest with this disease started with patients that had a lower risk of AMD. Scientists correlated this decreased incidence with their diet. These patients had daily eating patterns that consisted of consuming leafy greens. This produce is loaded with various types of antioxidants.

So the NEI (National Eye Institute) started a study with a group of over 3,000 individuals. They ranged in age from 55-80 years. Researchers were looking at the effects of AMD in conjunction with nutritional supplementation. They named the study ARED (Age-Related Eye Disease Study).

This long-term study was trying to find a simple way to stop AMD. Scientists were attempting to discover ways that antioxidant nutrients would interfere with this destructive process.

This was found to decrease the progression of AMD. Researchers later discovered that individuals that smoked should not be taking beta carotene. The pre-vitamin A substance may accelerate lung cancer progression.

These nutrients decreased risk of progression of AMD by 25% and vision loss from the disease by 19% with daily intake as a supplement.

There is the new makeover of ARED coming out called ARED2. This study has enrolled over 4,000 patients with ages ranging from 50-85. Additions to the supplemental package included omega-3 fatty acids (DHA and EPA), lutein and zeaxanthine. Zinc dose was lowered to be in the proper ratio with copper. Beta-carotene is deleted from the ingredients to eliminate any possible cancer progression. Results of this second study should be coming out within months.

What has already been released from preliminary of the ARED2 results has been that omega-3 components do not play a positive role in this new supplemental preparation. My opinion is that any fish oils are best coming from the source and not from a pill. The elimination of beta-carotene made no difference in the study results. Lutein and zeaxanthine replaced beta-carotene. These antioxidants decreased the risk of the disease more than in the original ARED study supplement. We have to wait for the final journal publication to actually see the percentage of benefits from the additions of lutein and zeaxanthine. 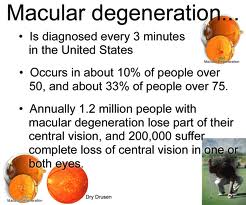