Is Brown Rice Killing You?

Since the end of World War II, chemical contamination of the environment has increased beyond comprehension. Remember DDT? 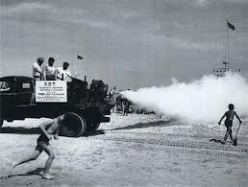 It was known as the “safest” miracle pesticide to spray on crops. In addition, DDT (dichlorodiphenyltricholorethenemist) was distributed throughout the U.S. from trucks to prevent mosquito infestation. DDT is also known as a chlorinated synthetic chemical. It was made stronger and more toxic with the addition of chlorine.  In addition, it would combine with fatty tissue in the body which makes it more dangerous and longer lasting. It caused significant declines in population of the bald eagle, pelican, falcon and other birds. Instead of the chemical being taken off the market, many of the avian species were put on the list of Endangered Species. DDT ended up running its toxic course through the entire food chain. It got into our waterways, leading to the deaths of many aquatic species. Banned in ’72,  it still contaminates many of our foods. Varying amounts of DDT are in each one of us. In fact, DDT contamination is still found in both the Arctic and Antarctica.

There are now thousands of man-made chemicals in our environment. Only a handful have been evaluated for the risks they pose to living things. Some may be additives or contaminants, other are industrial byproducts and some are processes of waste management that are released into our air and water.

In the case of arsenic, the United States is the world’s leader for industrial and agriculture reasons. Lead-arsenic compounds have been used in U.S. as an insecticide since 1910. The combination was banned in the 1980’s. Arsenic is still use today in animal feed to promote growth and prevent infection. Chicken waste contaminated with arsenic is used as fertilizer for crops. Rice fields are flooded with water that is contaminated with the run-off arsenic. This is more of a problem in the south central region (Arkansas, Louisiana, Missouri and Texas) of the U.S. that previously grew cotton treated with arsenic pesticides to combat the vermin. Stay AWAY from brown and white rice from those areas! They actually have rice that was designed to grow, despite high amounts of arsenic contaminating both soil and water. How convenient for the growers. How totally obscene for the individuals that will consume this toxic foodstuff!  Research shows that arsenic can cause cancer in humans.

Risks Of Arsenic Exposure Worth The Benefits Of Rice?

The USA Rice Federation (34 billion dollar industry) said that health benefits must be weighed against the risk of arsenic exposure. They believe that exposure is minimal. The Federation says no documented evidence exists for adverse health effects from dietary exposure to arsenic in rice.

So, the Rice Federation agrees that arsenic is contaminating the rice. Although, they believe that whatever arsenic you are exposed to in the rice, will be just fine. Research published in 2011 found that individuals ingesting more than 1/2 cup of rice daily had significant increases in arsenic in their urine. The levels were similar to individuals drinking a liter of water containing the federal max of 10 ppb (parts per billion) of arsenic. Just for your information, NJ has a maximum ppb of arsenic set at 5 ppb. Throw your hands up in the air. What do we do?

Tips To Keep Rice Safely In Your Diet

1. Brown rice usually has higher arsenic levels than white rice. The exception is the states mentioned above. Process of polishing brown rice removes the outer surface where arsenic is usually concentrated in the grain.

2. Rinse your rice before cooking in a 6:1 ratio. That means 6 cups of water to 1 cup of rice. Drain the excess water afterwards to remove approximately 1/3 of the rice’s arsenic amount.

3. Vary your grains with quinoa (really delicious), millet and amaranth.

4. Use wheat and oats rather than rice. They are not arsenic-free but have lower levels than rice.

Arsenic Is Colorless, Odorless And Tasteless. This Increases Its Danger.

FYI:  Fruit juices like apple and grape are also high in arsenic. Soils for these types of orchards are still tainted with lead-arsenic residue from the past.

In the early 1900’s, arsenic was sold in pharmacies as a rat poison. Today, rice is sold as a human poison, although its effects are not as abrupt.

Thanks Rice Foundation for your interest in humanity’s health.

Like Loading...
‹ Selenium-Tracing The Existence Of This Marvelous Mineral
Fruit Of The Vine-Let Me Tell You About Wine ›