Home › Food › Barking Up The Right Tree With Cinnamon Makes A Morning Kitchen Smell So Good!

Barking Up The Right Tree With Cinnamon Makes A Morning Kitchen Smell So Good!

Cinnamon is tree bark. It is also known as “sweet wood.” Hundreds of years ago, it was a highly prized spice only used by the wealthy. The bark was very rare and extremely expensive. Not only used as a flavoring agent but also placed in oils and incense for religious occasions. 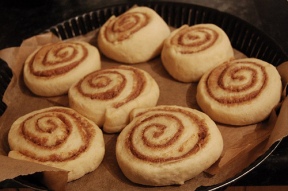 The less expensive “sweet wood” is called cassia from China. Spend the extra cents purchasing the Saigon version, also called Vietnamese cinnamon. This species of the spice has more aromatic oils. The result is a better taste and smell. Great for use in making hot chocolate, apple pie, cinnamon buns/toast, etc.

Mix a bit in the grinder when grounding your coffee beans. If you purchase your beans already ground, place a little on top of the grounds before brewing in your drip coffeemaker. The aroma is amazing. Cinnamon gives the coffee a nice subtle delicious flavor. It’s also a powerful healthy antioxidant.

Medicinal uses include lowering abnormally high blood sugar in diabetes. Too much of the spice may cause skin irritation especially on the mucous membranes. That would be areas of the lips and mouth. Caution because high doses are bad for the liver tissues. Should speak to endocrinologist or other health care professional before dosing with cinnamon. The cassia species of cinnamon is the most popular for lowering blood sugar. It’s also darker colored than other types of the spice.

Cinnamon in larger than just sprinkle doses may interact with certain medications like anticoagulants, diabetic drugs, antibiotics and heart medications. Ask your pharmacist for help if you have a question. Remember that the only stupid question is one that’s not asked. Always better to be well-informed and safe rather sorry later down the road.

Renovating Your Mind found that cinnamon is a wonderful preservative along with garlic for meat and fish. Great combination with some salt and onions as a marinating rub before the cooking process.

Now the musical addition to this program, “Cinnamon Girl”:

And for those who took the time to read down to the end of this page….rewarding you with some outrageous material unrelated to cinnamon. Enjoy kids!

Like Loading...
‹ Research Has Removed Cancer Cell’s Invisibility Cloak. Our Immune System Can Now See These Rogue Cells And Target Destruction.
Cooked Less Than Well Done, Your Meat May Harbor Something Scarier Than Your Mother-In-Law! ›