Home › Food › Bagged Salads That Read Triple Washing Our Greens Makes Them Seem So Clean, But Are They?

Bagged Salads That Read Triple Washing Our Greens Makes Them Seem So Clean, But Are They?

Renovating Your Mind discovered that the greens are only washed correctly once. Even though the packaging says triple washed, the clean wash is only going on at the top belt.

What occurs with triple washing is three conveyor belts. These are horizontally stacked with sprayed filtered water going from the top to the middle to the bottom belt. These belts all work themselves up to the top and then back down again. So the truly clean water is only sprayed from the bunch of greens that reaches the top of the water spraying. Those packaged greens are only washed once with clean filtered water. Marketing my friends makes you believe something that is far from the truth.

If the bagged salad has already been contaminated from the gecko, they could have washed the greens ten times and it still would be contaminated. Reason being, those little buggers (usually E-coli or Listeria) are tenacious. Once they get on the greens, they hug tight and won’t let go. They form a biological-like film on the produce. Their presence is invisible till they start multiplying in your body and symptoms hit like a ton of bricks.

Individuals most at risk are pregnant women and those individuals with compromised immune systems. Otherwise, our stomach acids would usually kill any bacteria contaminating the greens. If you have alcohol during the meal, this too would help to destroy any harmful contamination.

There were 20 recalls by the FDA in 2012 for packaged salads. Luckily, there was no illness reported from the contamination.

Greens are easily tainted because they sit so low on the ground. Fecal contamination are from living things (cattle, chickens, humans, etc). Think about this reality:

you are a farm worker way out in the field when nature calls. With both animal and human wastes comes possible E-coli contamination in the field. They have actually starting putting portable commodes (Gotta Go™) in many fields.

Listeria bacteria are naturally found in the soil. It is also present with poultry and cattle.

Important Things To Remember About Greens: 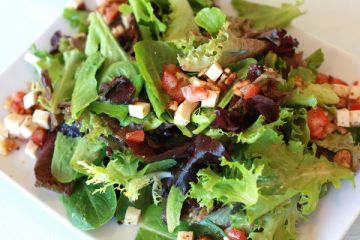