Home › Food › One Person’s Flush Is A Dung Beetle’s Treasure. You Won’t Believe What Renovating Your Mind Found Out AboutThis Shi**y Bug!

One Person’s Flush Is A Dung Beetle’s Treasure. You Won’t Believe What Renovating Your Mind Found Out AboutThis Shi**y Bug!

Dung beetles spend their day rolling big balls of excrement around their town. This is not a game of play. Tough work is necessary to use these balls of poo to nourish the needs of itself and the family. Crap is filled with all kinds of nutrients. It’s almost like the Limburger cheese of the bug world.

If you think their choice of food is consistent with a low-level of instinct, think again. These guys were born to be astronomers. Renovating Your Mind thinks that Carl Sagan would have been impressed. Research has found that dung beetles are always looking up at the heavens.

When they do their rolling, the bountiful bundle always travels in a straight line. Interesting. Theory was that these bugs were using both the sun and the moon to navigate from point a to point b. So researchers decided to conduct an experiment in a planetarium in Johannesburg, South Africa. The study was published in the Jan 2013 issue of Current Biology. 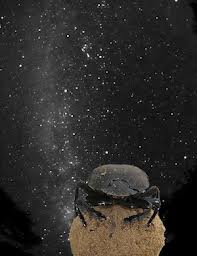 So they take the beetles into the planetarium and put up the night sky. They were timing the beetles to see how long it would take for them to roll the ball from one place to another. The closer the visual depiction of the true night sky, the faster the beetles would roll the dung. When they added all the stars including the telltale strip of the Milky Way, these guys sped up their rolling abilities.

What He Wears When He Rolls

They also had another group where they put shower caps on their heads. This would obstruct their view of the sky. These bugs would go way off their straight line taking much longer to reach the destination.

For the first time in history, man has been able to demonstrate that the bug kingdom uses the Milky Way and other stars to navigate the earth. It makes Chris Columbus’s boat trips so ho-hum.

Hey, would you hand me the Febreze, this article stinks.

Before you go, I want to share what provocative thoughts Zefrank has on our dung beetle:

Like Loading...
‹ Breakfast Reduces Chances For Junk Food Eating Frenzy
Renovating Your Mind Says, “Stop That Sneezing With The “Best” Product(s) For Allergies Available Over The Counter” ›