Home › Health › Plumeting Too Much Alcohol Down The Hatch, Oh The Humanity The Morning After!

Plumeting Too Much Alcohol Down The Hatch, Oh The Humanity The Morning After!

Limit Is One Please

Sex, like with everything else, has a lot to do with alcohol. There is an enzyme possessed by both males and females that breaks down alcohol.  It’s called alcohol dehydrogenase. Women have lesser amounts of this enzyme, therefore they usually feel the “spirit” faster than men. The dehydrogenase enzyme is a protein component in our bodies. It functions by taking hydrogen off alcohol making it less toxic. Unfortunately, it creates ketones and other noxious substances which irritate our systems sometimes causing nausea and vomiting. In the process we end up losing both precious electrolytes with water and feeling like crap because of that loss. 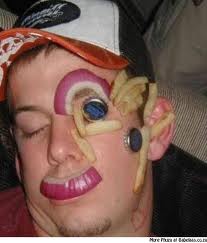 Wait To You Wake Up

Many drinkers build up a tolerance to alcohol over a period of time which is caused by excessive drinking. This is as a result of the liver becoming more efficient at breaking down alcohol faster as a protective mechanism. Chronic alcohol intake leads to cirrhosis which is a permanent scarring of the liver. If this excessive drinking goes on for an extended period of time, the patient then develops a thiamine (B1) deficiency. Thiamine absence with alcohol becomes a serious illness known as Wernicke-Korsakoff Syndrome. The syndrome causes a brain disorder where patients lose their memory and the ability to form new memories. Approximately 85% of alcoholics will develop this syndrome after 10 years or more of excessive alcohol use. Treatment with thiamine is not always successful, especially  if the disease has progressed past a certain point.

Many studies observed both women and men who were long-term excessive drinkers. Their findings came up with some very disturbing results. Both male and female brains start shrinking dramatically, with women experiencing this brain degradation much faster then men. Both sexes ended up with severe learning and memory problems.

Renovating Your Mind reasons that if alcohol accumulates more rapidly in women, than alcohol remains in higher concentration much longer in women than men. Therefore each time an alcoholic incident occurs, more damage is seen in the woman than the man because of the female’s higher blood alcohol level.

Lovely, How’s That Banging In Your Head

The morning after each night of alcoholic insult to the entire body is a very nasty experience. First, the body’s electrolytes/water are usually depleted by excessive urination. Cotton mouth, being one of the symptoms of the “hangover”. The mind is completely out of it. You know your awake, but you wonder if you are really conscious or still inebriated. Sometimes, there might be so much alcohol left in the body you still could be smashed. If you also vomited then you lost not only water but minerals and also some electrolytes. This increases the effects of the hangover. Your body requires water replenishment that contains both some sugar and salts. I recommend a dye-free Gatorade or Gatorade-like product for fluid replacement.

The Romans thought that eating a fried canary would cure a hangover. Greeks believed that consuming mass amounts of cabbage would rid one of the ills of drinking too much. There are currently no proven treatments for hangovers.

Bits Of Information When Drinking Alcohol

Like Loading...
‹ Renovating Your Mind To Our Reality Being Just A Holographic World
Aspirin Continues To Reinvent Itself As A Human Safety Shield ›