Home › Health › FISH-Sometimes What You See Labeled Is An IMPOSTER!!!

FISH-Sometimes What You See Labeled Is An IMPOSTER!!! 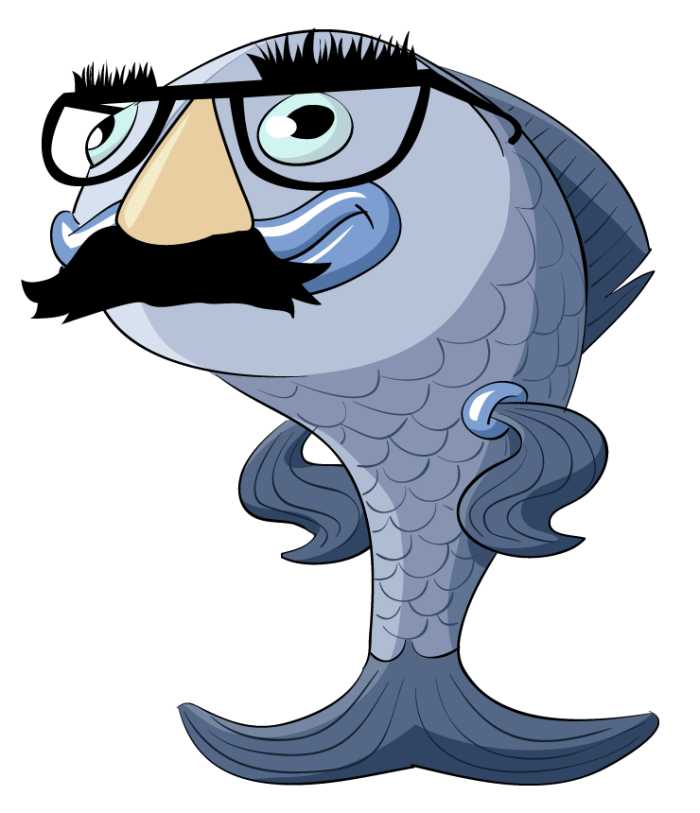 A FISH WITH AN IDENTITY CRISIS

Americans love fish. That’s great, because we should be consuming at least 2 fish meals a week for their healthy benefits. But, are we really getting the kind of fish they say they are selling us?

Recent studies went so far as purchasing fish from both retail stores and restaurants, then analyzing their DNA for proof of labeling. Once the unattractive fish head gets cut, it becomes harder to identify what the fish was when it was alive and kicking. They found more than 20% of the fish were mislabeled, incompletely labeled or misidentified by the fishmongers.

Now I realize that mistakes happen but…sometimes the reasons are profit motive or sleight of hand as a result of the fish being unavailable because of overfishing.

An example of profit motive like red snapper which in 2012 sold for about $24 a pound. Say I labeled it and said, red snapper, but actually, it was a less expensive distant relative called vermilion snapper. Great for the merchants bank account, but down and out consumer FRAUD! Then what about thinking you are purchasing Atlantic halibut but are given Pacific in its place. Big deal, different ocean right? Well in this case, Atlantic halibut are overfished and just so happens the Pacific variety materializes for the sale. Although, the sign says Atlantic its really Pacific you are getting for dinner.

A real problem is the sale of catfish. This shocks me! I just thought that catfish were ubiquitous. Seems that some stores are selling a catfish largely imported from Vietnam called sutchi catfish, a farmed catfish where some of the farmers use unapproved drugs in the water. You knew why right? Because they can get it dirt cheap!

One of the main problems here is that the FDA (Food and Drug Administration) is understaffed, underpaid and overwhelmed. Even though 86% of the seafood sold in the US is imported, the FDA only can physically exam about 2%. This figure is from 2008 and that figure hopefully has gone up in recent years. Myself, I wouldn’t be too optimistic about an increase in budget and manpower in the FDA. 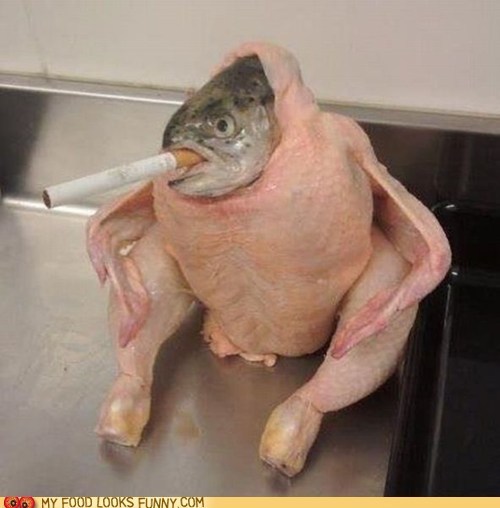 A Rare Picture Of A Fishen, Taking A Smoke Break After A Failed Attempt To Impersonate a Chicken. 🙂

A great site to help you with your seafood choices is:

Another excellent one is to see whether the seafood is wild and what country of origin:

Whenever you go out shopping for seafood, please:

Use your nose, if it stinks move on. Smell ammonia, keep walking and use it as incentive to clean your bathroom.

Fish should be on a lots of ice. Keep it cold to keep it fresh.

Price or label tags should not be stuck in the fish. They harbor bacteria and chances are they are used again and again.

Fish eyes should be clear. Should not look like they need cataract surgery. Tell the fish monger they need a opthamologist.

Firm and shiny flesh are another requirement. If there’s slime, move on down the line. 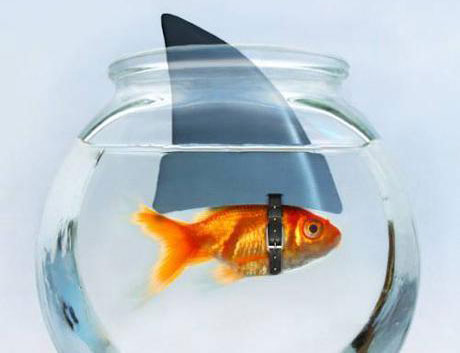 Right, Sure, That’s A Blue Shark, Wannabe! 🙂 Dare You To Stick Your Finger In That Bowl