Home › Health › Ancient Heirloom Grains: Is This Food A Stranger, Or Really Just A Friend You Haven’t Met?

Ancient Heirloom Grains: Is This Food A Stranger, Or Really Just A Friend You Haven’t Met? 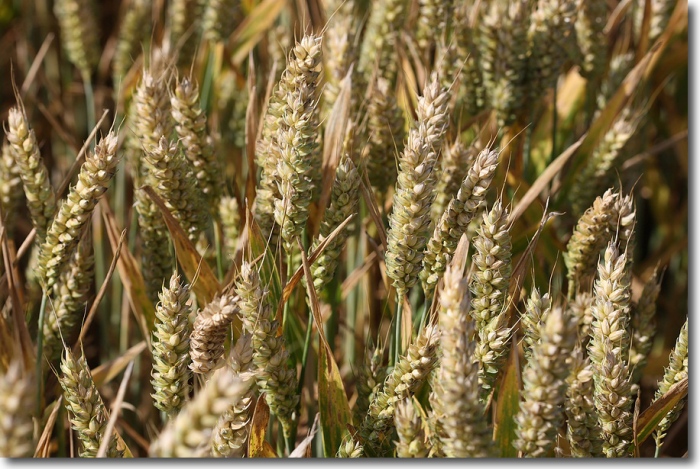 I want to formally introduce you to einkorn wheat. This wheat is one of the major heirloom grains domesticated some 10,000 years ago in the Tigris-Euphrates regions. When they mention grain in the Bible, they are speaking of einkorn. So what is the big deal. Is this new, old food worthwhile or just hype?

I used to frequent a pizzeria many years ago. Got friendly with the owner and one day start discussing flour and water. He told me the taste of the dough is due to the quality of the water and well as the type of flour. He would laugh when I would beg him to make me a whole grain dough pizza. He said, “One day, I make you a nasty whole grain pizza.”  That day came when I walked into the restaurant, after ordering a pizza by phone. He smiled at me and said, ” I got a surprise for you.” He handed me two pizzas. I said, “why two pizzas? I only ordered one!” He said, “get the hell out here! Go home and eat your pizzas!”. I gave him a look and took the pizzas home. I tried the first pizza and as always, it was an excellent pie. I opened up the other box. It smelled different but good. When I tasted the pizza, it was off the charts great! It seemed like a thicker heartier pizza pie. I called and complimented him on how the new type of pizza was incredible. He just kept laughing. What he had done was mix white wheat flour with whole wheat flour but he also added spring water. So I said, “you are right, it makes it taste so much different with the good aquifer water and adding the whole grain flour.” He said,  “Don’t tell anybody, I just make it for special people. Many of my customers won’t like the taste compared to the white flour. I would lose business. So, please keep this nasty whole grain pizza to yourself.” I disagreed with him but didn’t want to argue. I thought later about what he said, and the pizza did taste significantly different. He probably was right about his regular customers not being happy with the taste.

The same thing goes for heirloom grains. It has a different taste from regular flours. You may like or not like the taste. Now kids, here comes the interesting stuff: 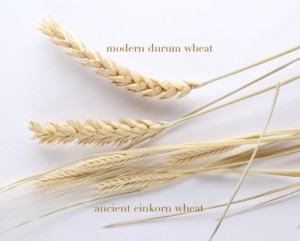 1. With the domestication of grains, man has developed grain products with high yields. The more grain grown per acre, more money in the farmers pocket. Einkorn grains give lower yields. So guess what, it is going to cost more money.

2. Einkorn wheat grains have a higher protein,  lutein, phosphorous and potassium content versus today’s wheat grains. That is very cool.

3. For those with mild gluten intolerance, einkorn kernels have less gluten but they are not gluten-free.

4. Einkorn is a diploid. This means that this grain has 2 (di-) chromosomes (-ploid) Who cares? The modernization of grains brought about hexaploid which has 6 (hex-) chromosomes (-ploid). Increasing the chromosomes, allowed them to be broken up and processed easier for the production of bread. Modern wheat is a larger grain with an easier to crack outer coat. It also increased the gluten content of modern grain. That is a bad thing for people with gluten intolerance. 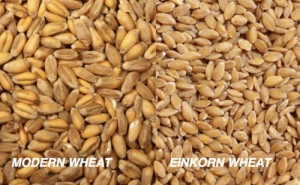 Einkorn wheat is the oldest and most purest form of wheat available.

Try something different to bring more variety into our lives. Einkorn, it’s what good for bread.

Like Loading...
‹ Popeye Knew That Beyond Spinach He Needed His Olive Oyl ;)
The Bucket Brigade Hiding Inside Your Mitochondria ›