Home › Health › The “Other White Meat” Is Truly Deceit. Please Consider This When You Ready To Shop For

The “Other White Meat” Is Truly Deceit. Please Consider This When You Ready To Shop For 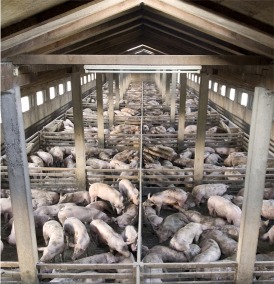 The “Other White Meat” was a marketing ploy that suggested to the consumer that pork was as healthy as chicken and turkey. It worked and increased pork sales 20% in about 5 years.

In the supermarkets, such pretty packaging, displaying delicious looking pork chops, ground pork, pork tenderloin, etc. makes it look so good. The product presentation almost sells itself. That is, until you go back, behind the scenes in the swine stockyards and slaughterhouses to see the pretty poison that this meat poses to the consumer.

First, the presence of drug residues called ractopamine is found in a number of pork products. The chemical was approved by the FDA over 12 years ago. It is used to promote the addition of more lean meat and decreasing the amount of feed that is feed to the animal. It doesn’t benefit the consumer, but it does increase the profitability for the industrial farm. The chemical is banned in the European Union, Taiwan and China.

Second, antibiotics are given to pigs as growth stimulants and to prevent infections. As you can see from the picture above, hundreds of swine are held in extremely close confines. In fact, a hog industrial production factory can hold up to  2,000 plus animals in one facility. That doesn’t lead to increased swine bonding but does bring the risk of spreading infection to the highest level.

What if all of us were taking antibiotics like a vitamin every day to prevent infection? You think those antibiotics would protect us from disease if we eventually got infected anyway? Nay, and it is called antibiotic resistance. This allows the bacteria to mutate and render any antibiotics harmless.

What is happening in the pig? Pork samples were recently tested and found that almost 70% were contaminated with Yersinia enterocolitica. They also found Enterococus, Staphylococcus aureus, Salmonella, Listeria monocytogenes and there was one sample that contained MRSA (methicillin-resistant staphylococcus aereus). MRSA is difficult to treat and can be fatal.

Let’s look at Yersinia enterocolitica, which contaminated a majority of the pork samples. Suppose that we didn’t cook the pork long enough, at a high enough temperature and we got infected with the bacteria. Our symptoms would be watery diarrhea, possibly bloody, and also fever. The complications for a worse case scenario can get ugly and I will not burden you with the details. If antibiotics needed to be used, the bacteria will have a higher resistance which decreases chances for some antibiotics to work at all.

What can we do, especially, in those that love pork?

Buy only organic meat or none at all. I know it sounds drastic but if a majority of the population start to demand all organic, the price will go down.

Almost 80% of all antibiotics sold in the United States are given to animals raised to “feed” us. That is beyond disturbing!