Renovating Your Mind doesn’t understand why a consumer should have to worry about having to decontaminate chicken or risk serious illness.

Bird That Made News In Colorado

Chicken is very inexpensive. The meat is a high quality protein. Dishes like chicken soup, chicken parmesan, chicken marsala, etc. are scrumptious. Your pets love the leftovers. But is this fine-feathered friend safe to eat?

Incorrect preparation of the bird may allow your body to engage with a fowl collection of bacterial contaminants. These villains include Sally “Salmonella”, Chris “Campylobacter”, Edy “E.coli*“, Ernie “Enterococcus*“, Klaus “Klebsiella pneumonia” and Stephanie “Staphylococcus aureus.”

All names above have been altered to humanize these nasty bugs.

* Those bacteria are from contaminated feces. There are loads of poop hanging around in an industrial hen-house. Most of it, cleaned up by the mouths of the inhabitants. Good eating right?

Organic free range chickens have an entrée ranging from:

Birds that are raised inside an industrial farm are consuming:

Where Is The Drug-Free Zone In This Coop?

Organic chicken is badly contaminated just like the conventional product.

Bad bacteria normally inhabit chickens in both venues. When these animals get butchered, the insides contaminate the outside of the bird. What you see in the store may look pretty, but it’s loaded with nasty bugs.

The plus side is that certified organic chickens are not given antibiotics. The feed is higher quality. Birds are treated more humanely than those on industrialized farms.

Consumer Reports did an exposé on chicken. They sampled hundreds of pieces of poultry throughout the US from different corporate farms. Almost 100% were contaminated with bacteria that could result in serious food poisoning. More than half of the birds had fecal contamination. Almost 25% of all the sampled breasts had bacteria that were resistant to multiple antibiotics prescribed for food poisoning.

Not only are these animals being treated inhumanely, but their bodies serve as an incubation (ground zero) tank for developing multiple resistant deadly bacteria. Industrial farms keep their animals on sub-therapeutic levels of antibiotics to induce faster growth and higher weights. This only serves to cause even deadlier versions of bugs to proliferate.

Some years ago, banana distributors were putting stickers on their product saying, “Contains no cholesterol.”  A banana tree would have to contain a liver to make cholesterol. The ploy worked to actually sell more bananas during the advertising campaign.

Same goes for the marketing crap that is listed on the packaging for chicken.

Meaningless words that draw your attention but are complete bs terms:

Chickens are not raised in cages. Natural has no meaning so anything can be said to be natural. Pasture-Raised and Free-Range are not legitimate terms for humane treatment of the bird. No Hormones has no validity because it’s illegal to give hormones to chickens.

Consumers originally turned to chicken from other meats because it was lower in saturated fats therefore “healthier.” Healthy is only a fantasy unless proper rules are followed to decontaminate the bird.

One bird in the hand is probably more contaminated than those hanging out in the bush. I’d go with the bush. 🙂 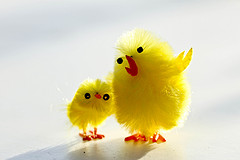 Why Did Two Chicks Cross The Street?

To get the hell away from the industrial farmer.

Like Loading...
‹ Worm-Like Pouch Whose Cul-De-Sac Location Is A Hiding Place For Beneficial Flora
Supplemental Information For Your Nutritional Pleasures ›