Home › Health › CHOLESTEROL: DIE WITHOUT ENOUGH OR DIE WITH TOO MUCH? CONFUSING?

CHOLESTEROL: DIE WITHOUT ENOUGH OR DIE WITH TOO MUCH? CONFUSING? 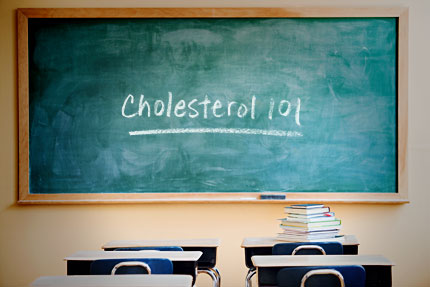 Please Take A Seat And Enjoy The Ride. Wheeee!!

Cholesterol is essential for our survival. It makes up the outer coat of our cell walls so that the cell won’t leak out into the body. Like a very tight plastic bag that seals in food preventing leakage and any disturbance of the contents.

Sex hormones allow the emergence of male and female characteristics. Breasts and a vagina become part of one picture. Pectorals, penis and testicles paint the other side. Interactions of both pictures when times are right, create future generations. This is all courtesy of sex hormones made from cholesterol building blocks.

Cholesterol is the starting point, for the body’s production of Vitamin D made in with the help of  the UV rays of the sun. It also responsible for the making of bile acids. Bile acids are detergents stored in your gall bladder that allow the emulsification and breakdown of fats in the body.

Now we come to the other side of the double edge sword of cholesterol. Too much in the wrong place could lead to disease, disability and death.

To explain, I need to tell you that cholesterol cannot freely float in the bloodstream. If it did, a logjam in the blood vessel would occur and your life would quickly cease.

So the body has developed a ferry system to grab onto cholesterol and submarine it through the blood system. Detergent, like the ferry system does the same thing to grease on your dishes/pots. It suds up and sucks the fat into its interior of the detergent globule ultimately being sent coursing down the drain. Otherwise, if you just poured grease down your drain, it would eventually clog that drain just like a clogged artery/blood vessel. 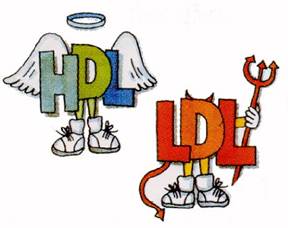 That leads to blocking off the arteries to blood flow. Eventually total blockage in your heart is, you guessed it, heart attack. The same goes for the brain called stroke, in the leg(s) called intermittent claudication, the penis and I call it Mr. Softie, kidneys give you kidney failure, etc.

So you can’t live without cholesterol and you can’t continue surviving over the long-term with too much of it in the body.

So what  should you do if you have high lucifer (LDL/bad) cholesterol? The medical community prescribes one selection from a group of medications called the statins. It will lower LDL and raise HDL (heavenly/good). Problem sometimes is side effects of severe muscle pain which could cause permanent damage and abnormalities of the liver. If this therapy is tried, it usually works in 85% of the patients. Another set of patients want to go natural and purchase Red Yeast Extract which is just like the medications used by physicians that are prescription items only. Problem with doing this on your own is no one is monitoring your liver for possible serious side effects that may become irreversible. Also each batch you buy of the Red Yeast may be stronger or weaker because unlike prescription medications the FDA does not monitor the strength of the batch.

Everyone Reacts Differently To Medication. You Have To Start Off As A Guinea Pig To See If It Works!

Get examined by a health care practitioner. If she gives you a prescription, discuss the medication with your pharmacist. Talk to a nutritionist about your diet, wine, antioxidants and exercise. Do some research on the internet yourself concerning medication safety and other alternatives to prescription.

Like Loading...
‹ Imagine Being Able To Go…
Hibernating With Yogi Bear, Boo Boo And The Family For A Couple Of Days :-) ›